Hi everyone! I’m here today with something really fun and exciting. As you can tell from the title, I’m going to be holding an international giveaway! I bet you’re wondering what #BooksBindUs is though, am I right? Well, #BooksBindUs is a hashtag started by Sarah K. Vetter (@SKVetterWrites) on Twitter. Here’s a short explanation about why the hashtag was created from the creator herself:

With all the events that are so polarizing in the news today I wanted to do something that reminded us of the things that do draw us together. In this community it is of course YA books. For me personally, this is a way to spread positivity and joy while also promoting books I love!

Sarah told us to pick a book or books that spoke to us to give away and then make a post talking about why we chose the book(s) we did. Today I’m beyond excited to talk about the books I picked! These books are very different from one another, but they both spoke to me and will be books I cherish forever. Without further ado, here are the two books I chose! 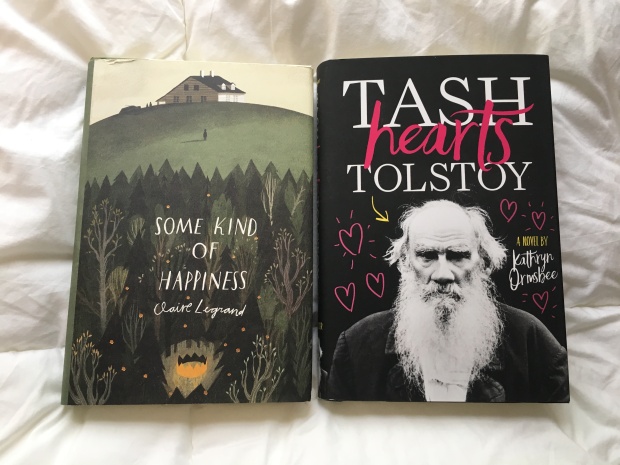 The first book I chose, Some Kind of Happiness by Claire Legrand, easily became one of my favorite books of 2017 when I read it back in February. This book is about 11 year old Finley who has depression and anxiety, but she doesn’t knows that that is what she’s experiencing. She has days she calls “blue days” where she gets overwhelmed by sadness and doesn’t know what to do about it. As a way to express her sadness, she writes about a fictional kingdom that’s deep in a forest. When her parents take her to stay the summer at her grandparents’ house, she and her cousins explore the forest near the house and it’s just like Finley pictured her fictional kingdom. I thought Some Kind of Happiness was absolutely fantastic! It was heartbreaking and emotional at times, but also had a strong undertone of hope and happiness. I wish I had had this book when I was Finley’s age because it would have meant even more to me then than it does now. I have a long-term relationship with mental illness and while Finley mostly deals with depression, she also experiences anxiety and panic attacks, which is what I have. I felt that the portrayal of these mental illnesses were very authentic. It felt so great to see a main character in a book that is going through the same exact thing as me! Some Kind of Happiness featured the first mental illness rep that truly resonated with me and I would love others to experience it as well!

The second book I chose was Tash Hearts Tolstoy by Kathryn Ormsbee. I read this book back in June of this year and like Some Kind of Happiness, I really related to the main character. Tash Hearts Tolstoy is about Tash Zelenka – an aspiring filmmaker and Youtuber who is asexual. Tash and her best friend write, film, and produce their own webseries that’s a modern retelling of Tolstoy’s Anna Karenina and one day their webseries goes viral. Suddenly they go from having a small, but loyal following to having a whole fandom. Meanwhile, Tash knows she’s asexual but is a bit confused what that actually means for her. She knows she has no interest in sex, but doesn’t know how she’ll ever have a romantic relationship without it. I have had many of the same thoughts and concerns that Tash had since discovering I was asexual earlier this year. It felt so validating seeing someone with the same thoughts and going through the same thing on the pages of a book! Not only that, it was great to see how supportive and understanding her friends were of her asexuality (as they should be if they’re her true friends!). Reading this book finally gave me the guts to come out as ace to my best friend and it went extremely well! It was so freeing to finally let my best friend know how I’ve been feeling and I haven’t regretted it for a minute. While it was hard to read, Tash Hearts Tolstoy also portrays a negative experience Tash has when she comes out to someone. The person says some horrible things to Tash and I felt so bad for her. I just wanted to give her a big hug and tell her it would be okay! And it was okay – she had some great friends (and a possible love interest) that were 100% supportive of her! I would love to share this book with both people on the ace-spectrum and those who are allosexual (not ace)!

Now, I decided to add a little something extra to my giveaway. In case you have already read both Some Kind of Happiness and Tash Hearts Tolstoy or if you don’t have any interest in reading them, I have 16 diverse books that you can pick from instead! Here they are:

Wondering how you can enter to win one of these books? Click the image below to be taken to the tweet and follow the instructions to enter!